Its an pleasure for me to feature CHEF BAKSHISH whose rich work experience of 28 years with Hotels, Culinary Education, Standalone Restaurants, Establishing an International Chain in India and Extensive International Travel has made him a thorough professional who specialises not only in cuisine but in all aspects of the hospitality business.Lets know more about him , his very special recipe and message for the budding chefs.

Chef Dean , more than 28 years of experience in the industry ,cooking from decades, an alumnus of IHM Ahmedabad. He started his career with The Oberoi Hotel Mumbai where he worked at the all day dining restaurant called Brasserie and later at the French speciality restaurant called Rotisserie, from there after a year he moved on to The Taj Mahal Hotel, Mumbai. Here he got an opportunity to work at the French speciality restaurant called Rendezvous and later as the Chef In-charge for their nouvelle cuisine restaurant called Ménage a Trois, from Mumbai he came to Delhi and started working at the prestigious European cuisine restaurant at the Taj Palace Hotel, the restaurant was inspired by the legendary luxury train that runs from Paris to Istanbul called The Orient Express, in a years time he became the Chef in-charge here. From the Taj group he moved to Culinary Education where he set up a culinary training centre for the cruise industry, post that he worked as a Chef Consultant for a year and then came back to hotels as an Executive Chef at The Park Hotel, New Delhi. He was instrumental in revamping the complete F&B. Fire, Agni, Mist & Aqua are restaurants that he established and the hotel flourished under his leadership. In 2007 he was honoured with the prestigious title of “Chef of the Year” by the Indian Culinary Forum and PHD Chambers of Commerce. In April 2010 he moved on to join Lite Bite Foods Pvt. Ltd as their Corporate Chef, there he worked on revamping the brands and then established a large ISO22000 compliant Base Kitchen to support all the restaurant concepts and the banqueting business. He was instrumental in conceptualising and planning the back of the house facilities for the F&B concepts (28 outlets) that Lite Bite Food had got the contact for at Mumbai Airport. In May 2013 he moved on to become an Entrepreneur and with his friends he brought an American restaurant chain to India called Johnny Rockets. Prime Gourmet Pvt. Ltd was the company they established to do this…. ABOUT ….business and he was the CEO & Executive Director of the company. The brand was acquired by Barbeque Nation in September 2017, post hand-holding and training the new team for a year Chef Bakshish Dean has been working on establishing a consultation firm that can offer high quality services to companies and individuals who would like to either establish themselves in the hospitality sector or would like to enhance or streamline the operations of their business to improve profitability.

His Message for the budding chefs 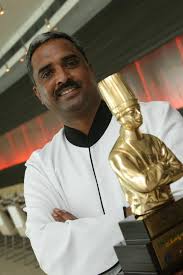 "If you want to be a successful Chef be crystal clear on what path to take, today there are multiple options available so choose what suits your temperament and personality, once decided you must then have a focused approach of mastering it, always remember mastering a subject starts with mastering the basics, so work hard on building a super solid foundation, this is the "only" way to become successful."

Chef Bakshish also adds that - With too many distractions around chefs these days specially young ones seems lost as they get tempted to do everything, I think that's a big hurdle in today's learning, Its great that so much of information is available but one needs to learn how to sit through and pick the right things to learn.

1. In a heavy bottom pan over medium heat add the sliced garlic followed by all cut vegetables except spinach, mix well and cook covered for 3 minutes.

2, Add the Parmesan rind, chickpeas, chickpea water, water, pasta, salt and pepper, mix well, allow it to come to a boil, cover and simmer gently for 8-10 minutes, stir every 3/4 minutes.

3. Add spinach, mix in well and simmer for another 4-5 minutes.

6. Pour in portion bowls and garnish with grated Parmesan cheese (any good hard cheese can be used in this soup) and a drizzle of olive oil.

This is a hearty soup which if complimented with some good rustic toasted buttered bread can turn into a fantastic meal!!